Liver and Vitamin A Toxicity 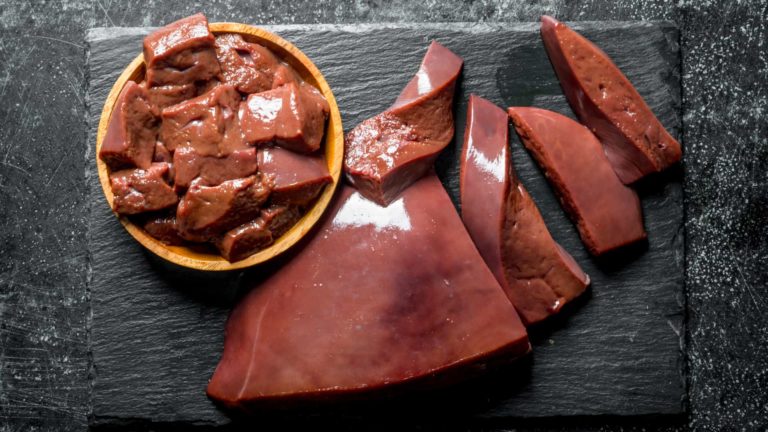 Can eating too much liver cause vitamin A toxicity?

In the carnivore community there seem to be 2 camps:

Recently, there has been some concern about eating liver and resultant vitamin A toxicity, as liver is one of the highest sources of vitamin A.

Meat-based advocated Judy Cho shared some concerns around eating too much liver and potential vitamin A toxicity in a podcast with Grant Genereux.

Grant completely eschews vitamin A. He recommends against eating liver, kidney, cod liver oil, butter, egg yolk, and dairy all of which provide vitamin A.

And he strongly recommends against eating liver which has an exceptionally high concentration of vitamin A, as he believes it can easily provide a toxic dose.

Eating Liver and Vitamin A: Anthropology

From an ancestral perspective, there are some cultures that were known to prize the liver of animals and others that would discard it.

Many people find liver unpalatable. And from an anthropological perspective, if you were to kill an elephant and found the liver off-putting, would you really eat it if there were thousands of pounds of meat that you found delicious?

On the contrary, surely there were times when acquiring meat was more difficult, and thus nothing would go to waste, including the liver.

Whether a culture prized liver or discarded it, it seems unlikely that humans ever ate copious amounts of liver day-in-and-day-out. There is only one liver per animal, so eating excessive amounts doesn’t seem ancestrally consistent.

Liver and Vitamin A: Toxicity

So can eating too much liver cause vitamin A toxicity?

In the research, most cases of vitamin A toxicity result from synthetic vitamin A (retinyl acetate or retinyl palmitate).

But I do think it’s possible to over-consume vitamin A from eating too much liver, kidney, or downing too much cod liver oil.

Vitamin A is a fat-soluble vitamin, meaning it can store up over time and lead to chronic toxicity (hypervitaminosis), which can cause nausea, vomiting, headache, and in severe cases, vision problems, hair loss, skin issues, and organ damage.

For example, vitamins D, K, and E impact vitamin A because they use similar machinery to regulate each other. Excess of one fat-soluble vitamin can encourage the breakdown and elimination of the others. So if you eat a lot of vitamin A compared to vitamins D, E, and K, it can lead to deficiencies in these other fat-soluble vitamins. However, if you were to eat this same amount of vitamin A yet were also consuming adequate D, E, and K, it could be just fine (especially vitamin D which has shown to be protective of vitamin A toxicity).

It’s not black and white.

To be clear, vitamin A is not a “toxin” but it can be toxic. It’s context dependent.

Testing for Vitamin A Toxicity

You can look at serum levels of vitamin A and other measures like GGT (gamma glutamyl transferase) which tend to elevate with toxicity, but getting a definitive diagnosis with anything short of a liver biopsy is tough.

Liver and Vitamin A: Recommendations for Avoiding Toxicity

Assuming you are healthy, eating a meat-based diet, not taking supplemental / synthetic vitamin A, eating moderate amounts of liver is likely 100% fine.

The evidence suggest under 10,000 IU a day (~60 grams or 2 ounces of liver per day) won’t lead to toxicity for most people (again, context dependent).

This is roughly 400g of liver per week, which is why I recommend that as the upper limit in Meat Health Academy.

You will also get vitamin A in egg yolks and butter and meat, so if you aren’t eating liver, you generally don’t have to worry about a vitamin A deficiency.

NOTE: do NOT eat polar bear liver, which has about 100X the amount of vitamin A as beef liver and is known to be super toxic and even deadly (reasons beyond just very high vitamin A levels).

Personally, I use simple rule of thumb.

I eat liver in nature’s proportions. I buy a cow from a local farmer. The amount of liver I eat is the amount that comes with the cow. Certain times I feel like I want liver, so I pull it from the freezer. Other times I feel an aversion to it. So I don’t eat it. I don’t go out of my way to eat liver every day, nor week, nor month. Nor do I go out of my way trying to add more liver to my diet.

If you want to learn more about how to do a meat-based diet, while ensuring you get all the nutrients you do need, but not getting too much (like vitamin A in liver), then check out the Meat Health Masterclass.

1 thought on “Liver and Vitamin A Toxicity”